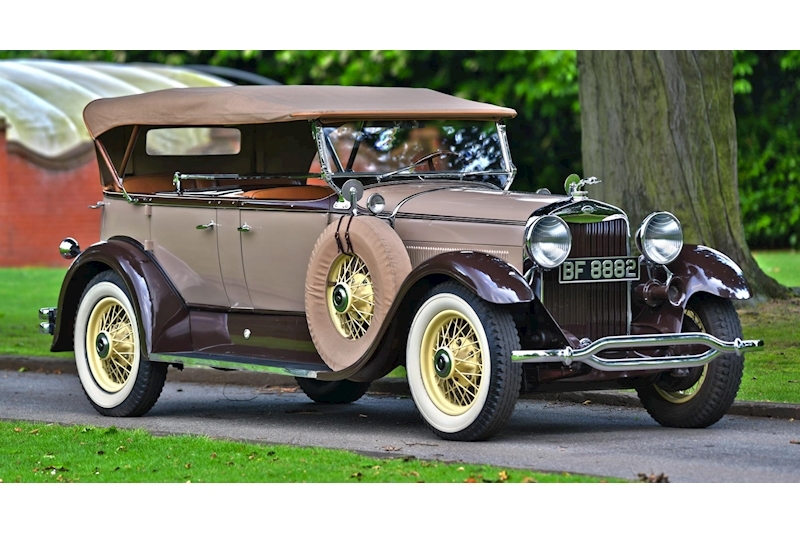 The Lincoln Motor Company had been founded in 1917 by the great engineer Henry M. Leland and his son Wilfred. After the Great War, Leland's first Lincoln was superbly engineered and built. Introduced in 1921, it was powered by a 358ci (6,306cc) L-head, 60°, V-8 engine. Unlike more conventional V-engines which offset the cylinder banks slightly to make room for adjacent connecting rod bearings on the crank journals, Leland's Model L used expensive, precision-made fork-and-blade connecting rods and disposed the cylinders directly opposite each other. Unusually for the period, Leland's V-8 had full pressure lubrication.

However, Leland had an engineer's vision, not particularly artistic and unfortunately, the bodies which clothed his well-designed chassis left something to be desired in the aesthetics department. Lincoln tried a quick redesign with a set of twelve body designs by Hermann A. Brunn but it was too late as dismal sales, the post-WWI recession and an erroneous 4.5 million-dollar tax bill spelled the end of Lincoln. It was bought out of receivership in 1922 by none other than Henry Ford hoping to balance the success of the bare bones Model ‘T’ by offering their, by now, loyal customers access to some of the best-engineered and best-built luxury automobiles in America.

Ford put his son Edsel, who had an innate sense of style, grace, balance and proportion, in charge of Lincoln and the new range soon began to reflect Edsel's vision. Initial production after the takeover consisted of the Model L, where the "L" indicated that it had been designed by Henry and Wilfred Leland. This would remain the catalogue designation until the model was superseded in 1931, a measure of Edsel Ford's respect for Leland, who despite having gone bust, was still revered for the quality of his engineering.

This, left-hand drive, 1930 Lincoln Model L-Type 176B Dual Cowl Sports Phaeton is a ‘matching numbers’ car that has been the subject of an older restoration but remains in simply exceptional condition. The coachwork is beautifully designed with a lightness of touch that makes the car appear smaller than it is and look well balanced from every angle. It’s a ‘dual cowl’ phaeton, a body style in which the rear passengers are separated from the driver and the front passengers by a cowl or bulkhead, in this case with its own folding windscreen.
The car is delightfully finished in a light Mocha over Dark Chocolate Brown complemented by a thin Primrose Yellow coachline and Primrose painted wire wheels. The interior has been fully restored and looks amazing in Saddle Tan over Nutmeg Brown carpets with four individual seats, lockable door pockets and lockable solid wood compartments to the rear. The Tan-piped, Natural canvas roof is in good condition throughout and comes with its roof ‘top boot’, detachable side screens (making this Model L fully weatherproof) and matching covers for the running-board-mounted dual spare wheels. Chromework abounds and looks fresh and the fit and finish, door shuts and panel gaps are indicative of the quality of this restoration.
The car is powered by its original 6.3-litre V8 and useful modifications include an uprated dual-venturi down-draught carburettor and an electric fuel pump have been added to aid on long journeys (originals with the car). It has two desirable Lincoln upgrades, a vacuum brake servo, introduced on the Model K in 1931 and offered as a retro-fit to Model L customers, and the desirable Model K ‘Gemmer’ steering.
We understand that the Lincoln is quiet, smooth and powerful and covers UK roads with ease, so much so, that you might question if you are actually driving a ninety-year old car. American engineering at its finest and delightfully presented, we imagine that turning up at your Golf Club in 1931 in this amazing L-Type would generate much admiration and a few envious stares and, we expect, that the reaction would be rather similar in 2021.