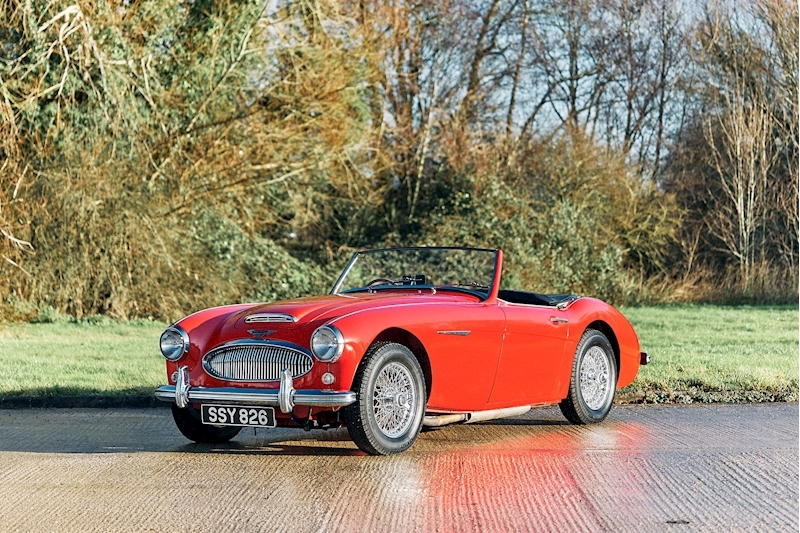 The Austin Healey 3000 has become one of the best-known British classic cars of the 1950s and 1960s following spectacular success in international rallying and circuit racing. A development of the Austin Healey 100-6, itself born of the four-cylinder 100, the 3000 was launched in March 1959 and was a significant improvement on the earlier cars featuring front disc brakes, wire wheels as standard and a more powerful (124bhp) 2,912cc BMC C-Series engine, ensuring a top speed of approximately 120mph. There was also a choice of 2-seater (BN7) or 2+2 (BT7) body styles. The Mark II (BN7) was introduced in March 1961 with a higher performance camshaft and, initially, a trio of SU HS4 carburettors which turned out to be difficult to balance and were replaced with twin HS6s in January '62.
A significant number of these ‘Big Healeys’ were exported to North America in left-hand drive and this lovely 1962, 3000 MkII (HBT7L/19086) was indeed one of those. It returned to the UK from Canada in the late ‘90s and was subject to thorough, photo-documented restoration including conversion to right-hand drive. Further work was carried out in 2009 including an engine rebuild with a new cylinder head and it appears the car has covered less than 4,500 miles since.
Finished in a striking Colorado Red and sitting on a set of chrome wire wheels this classic big Healey appears in very good condition. The black leather 2+2 seating is piped in red and the car is fitted with the desirable Overdrive, a Moto-Lita wood rim wheel and a smart black Tonneau cover. It’s accompanied by a fully documented history file including all receipts and photos of the strip down and rebuild, a Heritage Certificate and an MOT Certificate valid until September 2021.
If you are looking for good-looking classic in which to tour the Cotswolds this summer, then this nicely restored, chrome-wired, Colorado Red MkII may well fit the bill.